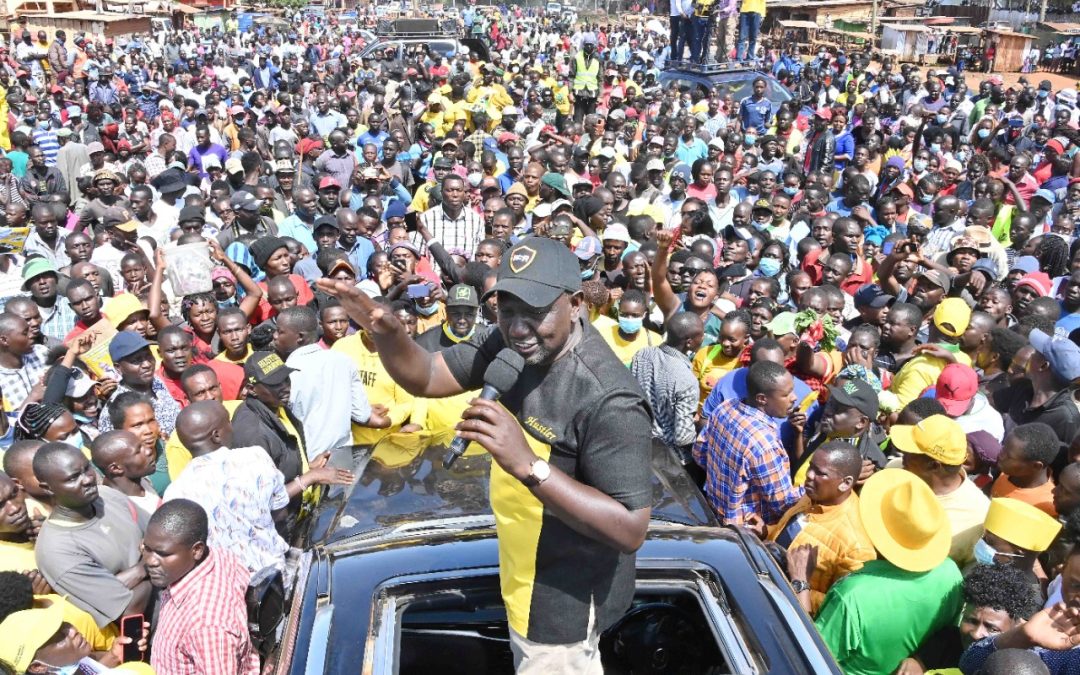 Deputy President William Ruto has urged Kenyans to reject leaders imposed on them.
He said no one should sell fear to Kenyans, saying it’s voters who have final decision on matters of leadership.
Dr Ruto said those imposing leaders on Kenyans would meet the wrath of voters at the ballot.
Speaking in various stopovers during his tour of Trans Nzoia County on Monday, the Deputy President said Kenyans should be left alone to elect leaders of their choice.
“Some few wealthy individuals recently carried out interviews in Nairobi hotels and declared  Odinga as their candidate.  They should not impose him on us because it’s voters who elect leaders,” said Dr Ruto.
The Deputy President said UDA was a party with national outlook and clear agenda of economically transforming the lives of ordinary citizens through the Bottom up model.
He told Kenyans not to be misled that there is ‘deep state and system’ which can decide on who the next president will be.
At the same time, the Deputy President told Kenyans to vote out leaders whose agenda is to change the Constitution to create positions for few individuals once elected to office.
He said it was now clear that Opposition leader Raila Odinga’s agenda is to change the Constitution within 100 days to create positions for few individuals at the expense of challenges facing millions of ordinary Kenyans.
Dr Ruto said economic empowerment of ordinary Kenyans should be leaders top priority.
“It’s now clear that the only agenda that my competitors have for this country is to change the Constitution to create positions for few individuals instead of economically empowering majority of ordinary citizens who hustle every day to put something on the table,” said Dr Ruto.
He said it was time voters rejected individuals who were pursuing selfish interests instead of empowering majority of ordinary citizens.
Among the areas the Deputy President addressed wananchi included Kachibora, Kesegon, Kapkoi, Kwanza Centre, Endebes, Kitalale, Machewa, Waitaluk and Sikhendu grounds.
Present were MPs Janet Nangabo (Trans Nzoi), Dan Wanyama (Webuye West), Didmus Barasa (Kimilili), John Waluke (Sirisia), Kimani Ngunjiri (Bahati), Robert Pukose (Endebes) and Aaron Cheruiyot (Kericho).
Others were Kipchumba Murkomen (Elgeyo Marakwet), Rigathi Gachagua (Mathira), Caleb Kositany (Soy), Mwambu Mabonga (Bumula), Samuel Moroto (Kapenguria) and Bungoma deputy governor Ngome Kibanani.
The MPs on their part, urged voters to reject leaders who have been imposed on them.
“Voters should shame those who are imposing Raila Odinga on us at the ballot. We should elect leaders who have our interests at heart,” said  Didmus.
Waluke and Mabonga told Defense CS Eugine Wamalwa to stop misleading the Luhya community to achieve his selfish ends.
“The Luhya community should not be misled by  Eugine Wamalwa to support candidates who end up being in Opposition after this year’s elections,” said  Waluke.
“We’ve been in Opposition more than enough. It’s time we support Dr Ruto so as to be part of the next government,” said  Mabonga.
Sen. Murkomen and  Gachagua said wealthy individuals have imposed Odinga on Kenyans  because they want him to protect their wealth.
“Kenyans should know that those who are imposing Odinga on us are doing so for their selfish ends. They have no time for ordinary citizens,” said Sen.Murkomen.
Mabonga said the ODM leader has frustrated many Luhya leaders including the late Michael Wamalwa and Ford-K leader Moses Wetangula, saying he has no business seeking votes from them.
“Odinga should be rejected at all costs. The former Prime minister has nothing to show the Luhya community in terms of development ,yet he served in various positions in previous