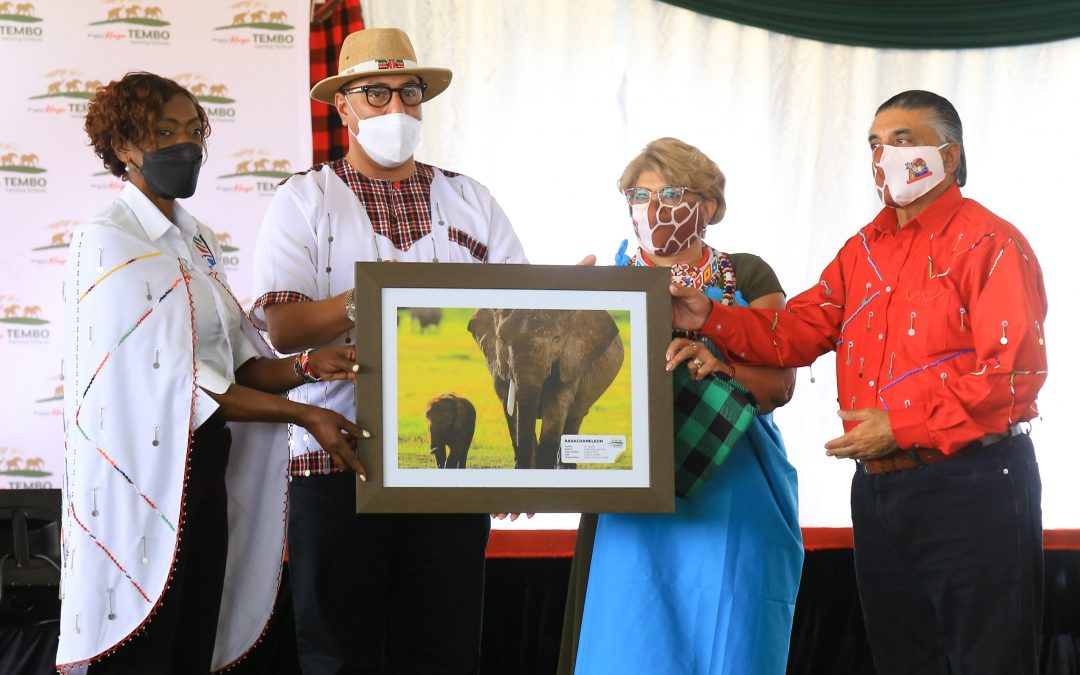 The Ministry of Tourism and Wildlife has announced that it had mobilised 16.5 Million shillings towards the conservation of elephants ,

The announcement was made during the inaugural Magical Kenya Tembo Naming Festival held at the Amboseli National Park, Kajiado County. During the event, corporates and individuals were allowed to adopt and name selected elephants after donating funds towards the initiative, which is aimed at boosting conservation efforts of the endangered species.

The elephants were adopted and named during the event which was officiated by Tourism and Wildlife Cabinet Secretary Najib Balala. The CS lauded the initiative as a move towards the inclusion of the public in conservation as well as providing enough resources for the protection of Elephants in Kenya. The elephants named include baby elephants (2020 – 2021), the big tuskers and twins.

The population of African savannah elephants has plummeted by at least 60% over the past 50 years, resulting in their classification as “endangered” in the latest update of the IUCN’s “danger list”. The Amboseli ecosystem is home to about 1,800 elephants with the highest population found in the Tsavo ecosystem, standing at 14,000.

In recent years, elephant poaching has reduced significantly leading to a surge in elephant populations in Kenya. According to the Kenya Wildlife Census Report, Kenya is home to a total of 36,280 elephants, representing a 21 percent growth from 2014, when poaching was at its peak. This increase has been realised thanks to the sustained government crackdown on poaching and illegal ivory trade.

However, the report also notes that human-elephant conflict has increased in many regions within the country as a result of the increasing loss of habitat and competition in land use.

Through the Tembo Naming Festival which will be an annual event, the government seeks to address these challenges with the hope of increasing the numbers of these species.

“This is certainly a great milestone for Kenya, this initiative will go a long way in ensuring that Elephants are protected in Kenya not only for ourselves, but also for the future generations. We all have a role to play in conservation and I therefore commend the team that has worked tirelessly to ensure that this is a success. I urge other like-minded individuals and organizations to join us in this noble initiative now and in the future,” said CS Balala.

He also noted that the “namers” in the 2021 Magical Kenya Elephant Naming Festival had set a precedent that the ministry would be working towards achieving every year going forward. “We have raised Sh.16.5 million so far this year and we plan to hit our target at the close of the financial year; I congratulate all the ”namers” and assure them that the funds will be used to ensure that our majestic elephants are well conserved. We want to look at issues concerning human Wildlife conflict, tracking of the elephants through collaring as well as construction of electric fences and community engagement among other issues”

On her part, Kenya Tourism Board CEO Dr. Betty Radier thanked the sponsors for embracing the initiative, noting the huge role conservation plays in tourism and by extension supporting livelihoods.

“I thank the namers and those who contributed for embracing and being part of this initiative. Conservation of our wildlife resources remains key for us to ensure that future generations enjoy our country’s heritage, natural resources and the incredible species that live within it. With our tourism being largely dependent on our natural resources including wildlife, it is important that we all ensure they are well protected and maintained. By so doing, we will ensure that tourism continues playing its key role in spurring the economy and supporting the many livelihoods that depend on it,” said Dr Radier.

KWS Director General Brigadier (retired) John Waweru said that the goal of the festival is to secure a future for elephants and their habitats in peaceful co-existence with humans while providing benefits and for posterity.