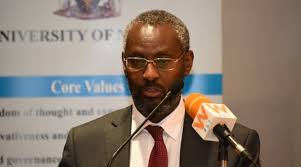 Education Cabinet Secretary Prof. George Magoha has withdrawn his case against the embattled UoN Vice-Chancellor Stephen Kiama after they reached an out of court settlement.

Justice Maureen Onyango has today marked the case as settled after Magoha had sought 30 days for further consultations to settle the matter.

The court last month allowed Prof. Magoha and Stephen Kiama to negotiate and resolve the leadership crisis of the UoN Vice-chancellor.

The Public Service Commission also agreed that if the contestants are willing and have agreed to try to resolve the matter amicably, it should be only fair they board that train.

Justice Maureen Onyango directed that the parties are at liberty to agree and resolve on who will be the university VC and appear in court today for the hearing.

Magoha had revoked the appointment of Kiama and dissolved the university council two weeks ago.

Last month, Magoha had revoked the appointment of Stephen Kiama as the new Vice-Chancellor of University of Nairobi.

Magoha said the appointment of a substantive VC will be done after the completion consultative meetings.

But he noted that Kiama will continue dispensing his duties as the Deputy Vice Chancellor, Human Resource and Administration at the university.