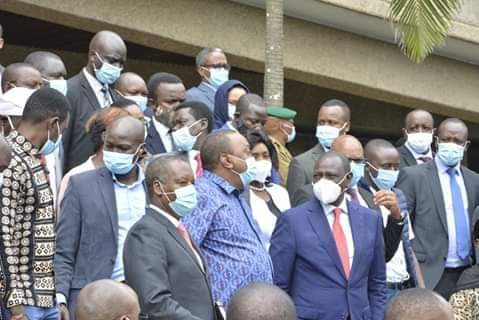 Garissa Town MP Aden Duale has been ousted as the Leader of Majority in the National Assembly and replaced by Kipipiri MP Amos Kimunya.

The new changes come after a Jubilee Parliamentary Group meeting head at the KICC chaired by President Uhuru Kenyatta this morning.

At the same meeting, Eldas MP Adan Keynan now takes over from Kimunya as the new coalition secretary.

In his acceptance remarks, the newly appointed national assembly majority leader, Amos Kimunya welcomed his appointment as the leader of government business in the parliament and thanked the President for exuding confidence in him.

Addressing the press after this morning after a parliament group meeting held by President Uhuru Kenyatta in record 30 minutes, Kimunya  said that he doesn’t take the appointment lightly.

In the wake of reports that a section of MPs allied to DP William Ruto absconding duty to attend the meeting, the Kipipiri MP has said that the meeting had overwhelming support from MPs who came to show their committed to the party.

On his part, Eldas MP, Adan Keynan has welcomed his appointment as the Coalition Secretary adding that their prime mandate is to make sure the Jubilee Agenda succeeds.

Speaking after the meeting, President Uhuru Kenyatta said that the Jubilee Party will communicate changes in the composition of House Committees to the Speaker of the National Assembly by Thursday.

He said the Coalition will do the communication through the new Leader of Government Business Amos Kimunya and Majority Chief Whip Emmanuel Wangwe. During the meeting, Adan Keynan  was named named Coalition Secretary.  Parliamentary committees will also  be reconstituted on Thursday

The meeting was attended by Deputy President Dr William Ruto as well as the Party’s  Secretary General Raphael Tuju and a total of 174 Jubilee Coalition Members of the National Assembly.

During the last PG meeting at the State House on June 2, National Assembly Majority Whip Benjamin Washiali and his deputy Cecily Mbarire were shown the door.

The PG meeting also resolved to effect further changes at the House committees as part of the ongoing purge to kick out all MPs who were against the president’s agenda.

The Speaker of the National Assembly Justin Muturi on Wednesday in a communication to the house confirmed the removal of various committee heads.

The new committee head will be announced on Thursday this week in what looks like whipping deputy president William Ruto’s allies.