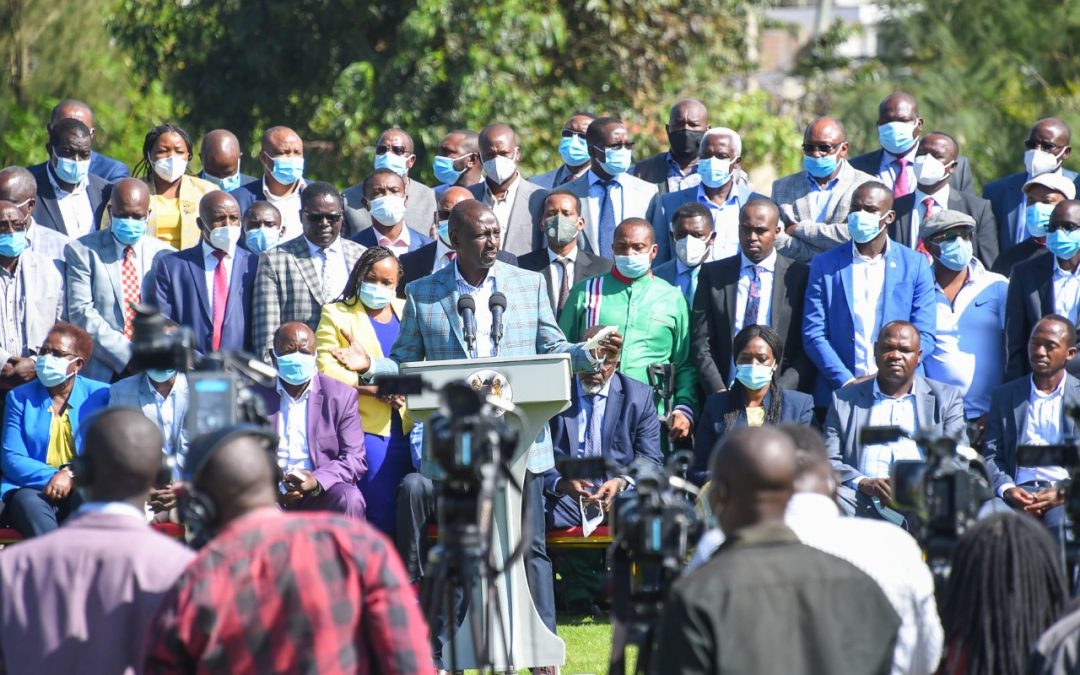 146 legislators among them 7 county governors have flanked Deputy President William Ruto to issue a joint statement on the Building Bridges Initiative document, even as signature collection for the document is expected to come to a close tomorrow, December 3, 2020.

The elected leaders have however called for further consensus building to improve the BBI document further before a referendum is held .

“The collection of signatures is the easy part. That is just a process issue. Our concern is the content of the document. We want to improve it.” – Deputy President William Ruto.

“Even at Bomas (of Kenya) we were told the window is closed. But we insist it is never too late to do the right thing. Unless you are telling us that the issues we raise are not reasonable, then all it will take is to republish the Bill. Collecting signatures is the easy part.”

The leaders further propose a multiple choice referendum and not one limited to a yes or no question. They said the proposed Ksh 14 B set aside for a referendum in early 2021 should be set aside to address the challenges facing the country on the COVID 19 pandemic and economic recovery.

“We are in the middle of a pandemic that has ravaged our country. We want a candid discussion.. We shd commit every resource towards the pandemic. There is a possibility of having this referendum alongside the general election in 2022,” DP Ruto said.

“These are proposals we are putting on the table in good faith. We can remove this referendum from being a win-lose. We don’t want it to be a contest between personalities but allow Kenyans to vote on issues”, DP Ruto said.

The joint statement is also proposing that the referendum be held in 2022 along with the General Elections.

“Take the referendum to 2022. We want to be persuaded why we can’t do it together with the election. Let us provide a mechanism for Kenyans to vote for issues, not a YES or NO” , DP Ruto said.

On the proposed electoral and nominated seats in the BBI document that attempt to achieve the two thirds gender rule as stipulated in the 2010 Constitution, DP Ruto said this can be achieved by having the current Women Representatives and scrapping off the nominated seats

“We want to discourage nominations. We want elected. We should have a conversation on Article 81.” – Deputy President William Ruto.