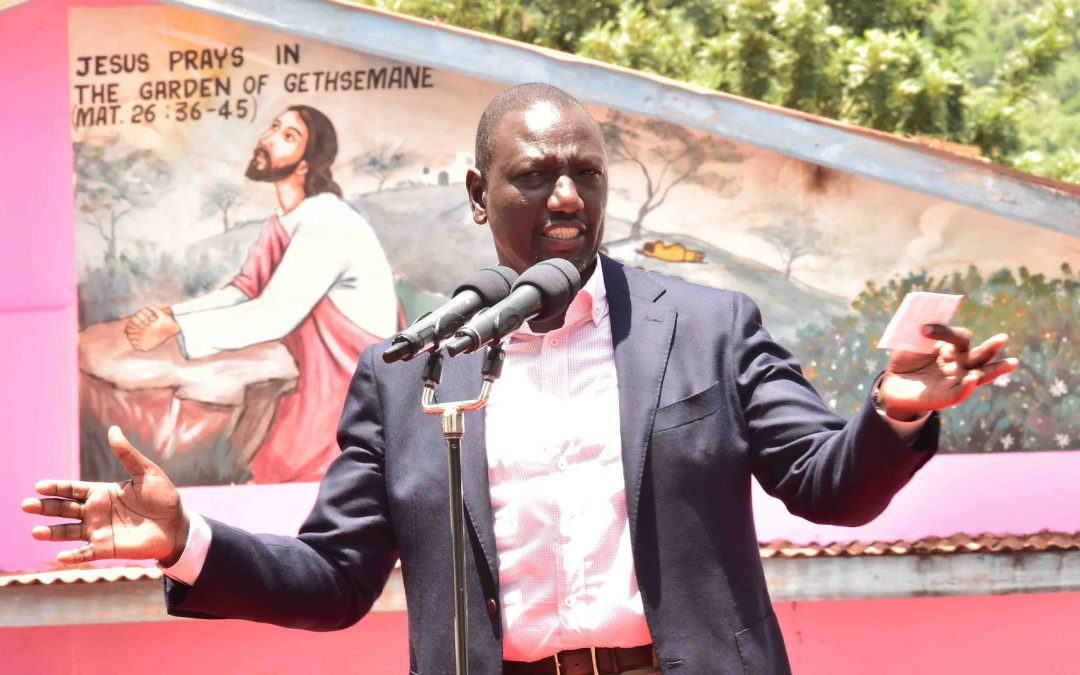 Deputy President William Ruto has asked the Opposition to desist from camouflaging in the Building Bridges Initiative (BBI) to propagate ethnic animosity.

He regretted that a section of the Orange Democratic Movement leaders were abusing the Initiative by sowing the seeds of hate and division among Kenyans.

“The ethnic profiling and incitement against communities that we are witnessing under the pretext of BBI must stop,” Dr Ruto warned.

Speaking in Tharaka Nithi and Laikipia Counties on Saturday during a church service and a school empowerment programme, the Deputy President said it was the wish of President Uhuru Kenyatta that BBI unifies and puts Kenya on a progressive lane.

He added that the BBI version, as advocated for by the President, was never meant to undermine or infringe the rights of Kenyans or any community.

“So, why are some leaders pushing for a model of BBI that goes against the spirit of the inclusivity and development of our country?”

Dr Ruto said Kenyans were free to seek leadership positions, live and invest in any part of the country.

“The President did not tell us that there would be communities who would be denied their basic rights,” he said.

The Deputy President reminded Kenyans that their enemy was poverty, ethnicity, tribalism, hate and unemployment.

“No one should lie to you that your enemy is a member of another tribe.”

His sentiments were echoed by a section of Jubilee leaders who accompanied him in the two functions.

They asked their Opposition counterparts to be progressive in their thoughts and leadership, arguing that a divided Kenya would slug the country’s development agenda.

They hit out at the organisers of the BBI rally in Narok for isolating non-Maasai living in the region.

Kiunjuri asked Kenyans not to forget that the country had in the past suffered in the hands on tribal politics.

He said it was time the Opposition leader declared his stand on critical national issues.

“You cannot take Kenya back more than two decades; we have made steps forward to empower the people,” he noted, adding: “Mr (Raila) Odinga must tell us if he wants a united or divided country.”

Kithure and Nkatha noted that it was wrong for politicians to use BBI to divide Kenyans.

“The opposition has hijacked the BBI. They are after derailing its primary purpose,” said the Tharaka Nithi Senator.

MP Kiarie explained that Kenyans would support BBI if it focuses on its original aspiration of uniting and reconciling Kenyans.

“We want the genuine BBI that is committed to transforming Kenya,” said MP Kamuren.

MPs Gitonga and Muchira cautioned that there was a danger of the hijacked BBI staining President Kenyatta’s legacy.

“We do not want to take Kenya back to the dark days of hate. It took us time and a lot of resources to build one Kenya. Our next agenda is to take the country to a higher development level,” observed MP Muchira.

MP Wangari said it was primitive that some leaders were still confined in tribal cocoons.

“I am a leader of people from diverse tribal backgrounds. The ethnic push by the Opposition is more like the the beating of the drums of war which must be condemned,” she added.

Ichungwa said a genuine BBI is one that would better the country’s economic fortunes.