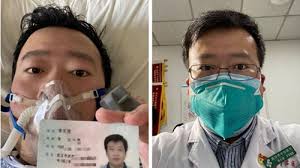 A great grief has come upon in China after a doctor who warned about coronavirus has died.

Reports say Li Wenliang, who was a medical doctor and one of the first eight people to warn the public about the coronavirus, died late last night due to the infection, sparking a level of collective anger and grief unseen on Chinese social media.

Dr.Li an ophthalmologist, first came in contact with the virus, after treating a glaucoma patient who at the time was not aware that he had already been infected with the deadly virus.

Dr Li, , posted his story on Weibo from a hospital bed a month after sending out his initial warning.He had noticed seven cases of a virus that he thought looked like Sars – the virus that led to a global epidemic in 2003.He the sent out a warning to fellow medics on 30 December, in a chat group warning them to wear protective clothing to avoid infection.

Four days later he was summoned to the Public Security Bureau where he was told to sign a letter. In the letter he was accused of “making false comments” that had “severely disturbed the social order”.He was one of eight people who police said were being investigated for “spreading rumours” Local authorities later apologised to Dr Li.

So far at least 636 people have died and 31,161 others have been infected. Earlier on Wednesday, The World Health Organization (WHO) said that the number of new confirmed coronavirus cases had fallen for the first time since the outbreak began.