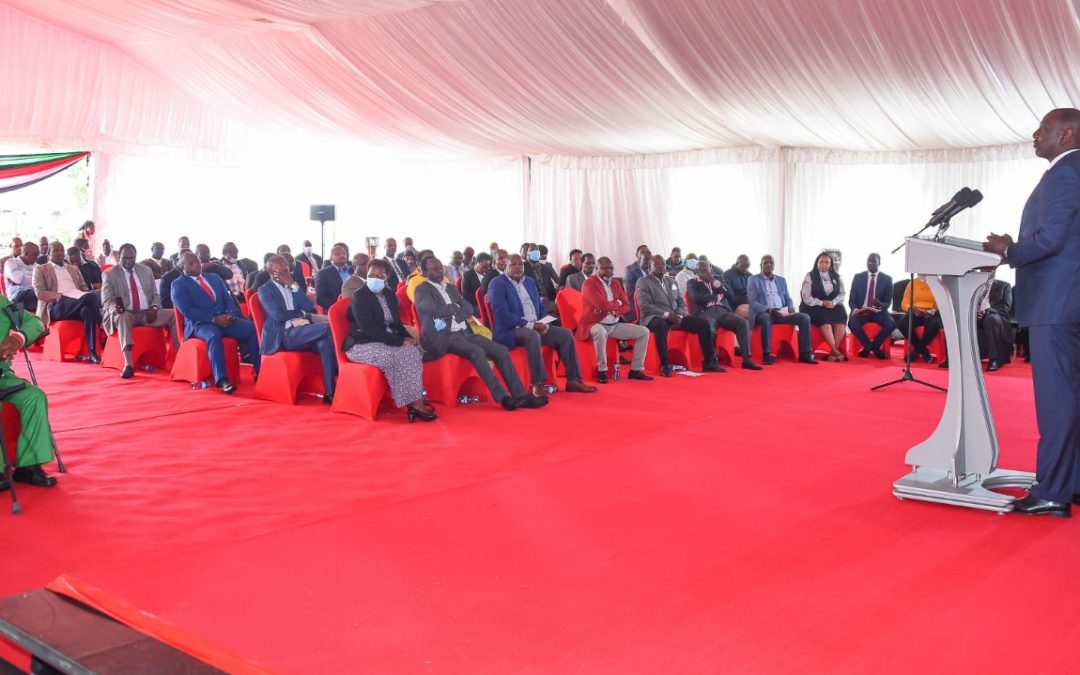 Deputy President Dr. William Ruto has today hosted 139 Members of Parliament from all political parties at his official Karen Residence, Nairobi County.
On his social media pages, Dr. Ruto said the legislators discussed the shift of the country’s national discourse from the retrogressive and divisive politics of tribe, to a new conversation that is inclusive and centered on people empowerment.
“Also on our table of engagement were the issues of security and the rule of law”, DP Ruto Tweeted.
After the meeting, the legislators addressed the press, stating that they had met to champion a broad-based, people centered, bottom-up empowerment of Kenyans, to reflect on and examine the state of various developments of concern in the country.
“We have consulted widely and deliberated deeply on the way forward to restore reason and reasonableness to our politic a d leadership and affirm a message of tolerance, inclusion, hope and fraternity to the people of Kenya. We particularly note worrying emergent issues that threaten the stability, peace, cohesion and integrity of our nation and wish to lend voices to them”, they said.
The legislators went on to list issues such as stage instigated violence, stating that they are concerned about the seemingly glorification of a backward culture of political criminality.  The legislators said they will continue to propagate an ideology of principled engagement, peaceful co-existence brotherhood, solidarity and compassion.
“The evil scheme that begun with the targeted withdrawal of security of members of parliament has now been extended to total withdrawal of official security coverage by police officers of meetings attended by Deputy President…This is a grave threat to national security.We are aware that a special ‘officially sanctioned’ hit squad has been formed to perpetrate political violence as witnessed in Kenol, Murang’a county and Msambweni in Kwale, and that it has been tasked to cause violence at the Deputy President’s functions that were held at the Coast this last weekend.”
“We understand that the squad’s mission is to instigate targeted political violence, kidnap political leaders and execute political assassinations”, the speech read.
The legislators said they have relayed the information to the relevant authorities with all the details and specific identities of the involved officers. They also demanded that the hit squad be disbanded immediately.
The leaders also demanded that the Inspector General of Police deployed only uniformed security officers to political meetings, rallies and events have their service numbers displayed on their badges.
The leaders are meanwhile urging the international community, specifically the United States of America, as well as the African Union to turn their focus on Kenya, to help the country prevent a descent into political meltdown ahead of the 2022 General Elections.
Meanwhile, the legislators have dismissed attempts to impeach the Deputy Governor saying it was a tall order. Responding to questions from the press, former Majority leader, Garissa Town MP Aden Duale and  Meru Senator Mithika Linturi, said the efforts being spearheaded by Lugari MP Ayub Savula is a vain attempt , but that they are ready to confront it at the floor of Parliament,as the sessions resume tomorrow.