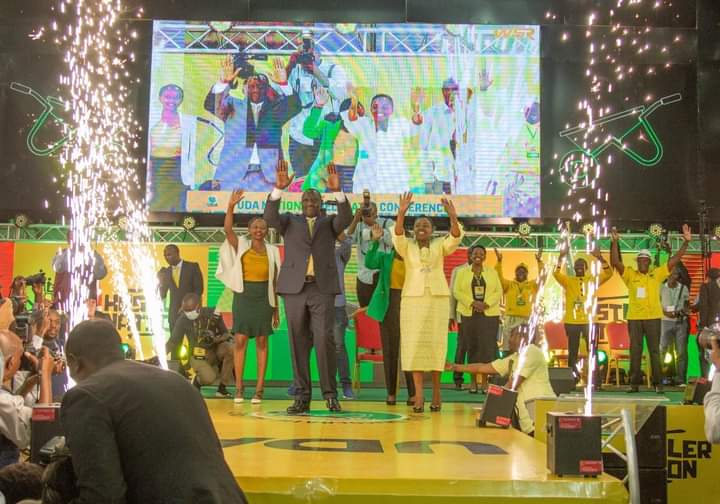 Deputy President William Ruto says he is ready to face his opponents and win in the upcoming August 9th general elections.

“I am humbled and honored. I will live up to your trust; I shall do my best to exceed your expectations, I shall neither stop, pause, slow down nor hesitate until I deliver.,” Dr. Ruto pledged, as he accepted the endorsement as the UDA presidential flagbearer  during the party’s National Delegates Conference NDC in Kasarani, Nairobi.

Ruto has noted that he will steer the growth of the country through promoting inclusiveness and enterprises .He further pledged to free the state agencies that have been used by the government to settle political scores.

The Deputy President called out the current leadership saying that it had made the running of the country about a few individuals. He insisted that Kenya is about 50 million people, calling out President Uhuru Kenyatta and ODM leader Raila Odinga led Building Bridges Initiative.

“We will not accept to go back to the dark days of imperial presidency we are moving forward to a Kenya that has the best interests of the 50 million people,” he said.

DP Ruto regretted that the current regime has misused institutions and used them to harass people close to him.

“They have been persecuted the MPs and Governors present here. Their crime was being my friend. I want to salute the leaders here, they are made of heavy metal and history will judge them. They stood up against tyranny and blackmail.” He said.

He said once elected, he will appoint an accounting officer for Inspector General of the police as well as the DCI to give them financial independence and ensure that going forward they will not rely on the Office of the President to discharge their responsibility.

“They have weaponized, KRA, DCI, EACC to run political errands, to bring down business that belong to people who don’t worship them. On our first day in office we will free the DCI and KRA from state capture,” He said.

Dr. Ruto vowed to professionalize KRA by digitize services to enhance tax collection in a fair manner. He  further said he will ensure the independence of the Judiciary saying, “We want an independent Judiciary. One that doesn’t receive phone calls from the executive to write judgements.”

Dr Ruto also accused his competitors in the August 9th election of taking the Country back to the days of imperial Presidency. He said they will not accept the reintroduction of BBI as it only want to use it to put in place a President who controls other institutions of Government.

The UDA  party NDC attracted over 5000 delegates who endorsed the party leader, DP Ruto’s presidential bid in line with the party’s Constitution. Among leaders present at the event were his Kenya kwanza allies Musalia Mudavadi and Moses Wetangula.