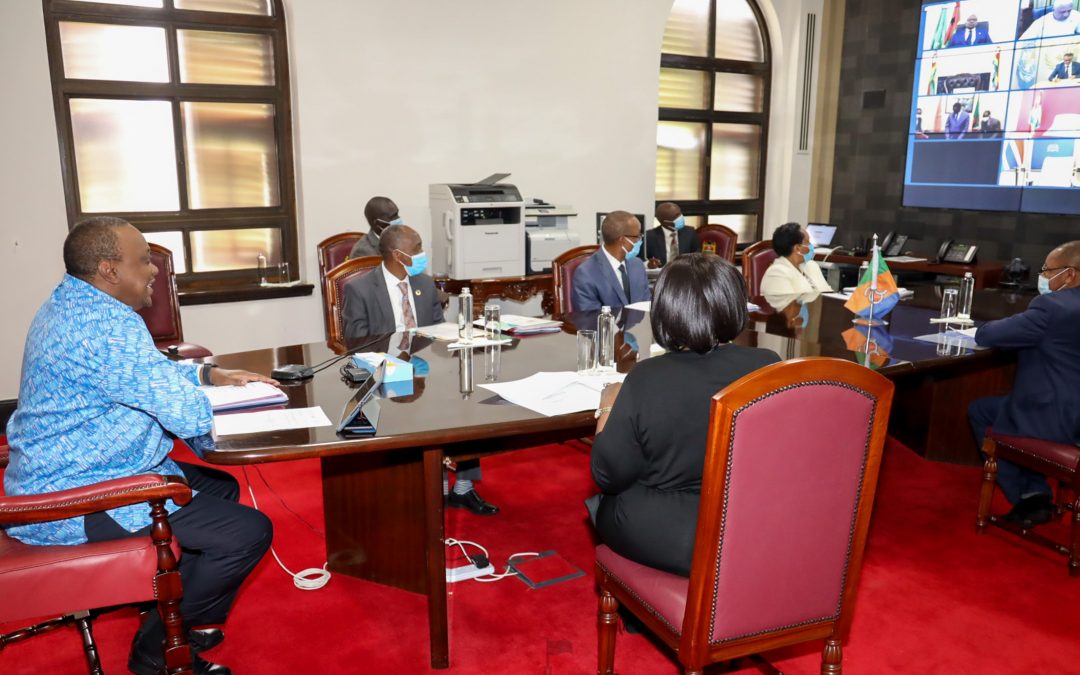 Countries that form the Organization of the African, Caribbean and Pacific States (OACPS) have identified the growing debt burden and existing economic sanctions among its members as challenges that are aggravating the negative effects of the Covid-19 pandemic. Speaking during a virtual summit of Heads of State and Government that was convened by President Uhuru Kenyatta in his capacity as the organization’s President-in-Office, the leaders welcomed the various debt relief measures being rolled out by global lenders but called for more interventions including debt cancellation.

In his opening remarks, President Kenyatta observed that the debt of many OACP countries continues to rise saying close to half of low income and least developed countries have hit debt crisis levels.

“The debt of many member states continues to rise. Forty four (44) percent of low income and least developed countries (LDCs) are in debt distress or assessed as being at high risk of external debt distress,” President Kenyatta noted.

He added: “Covid-19 and related global economic shocks will exacerbate this problem”.

In his recorded address, French President Emmanuel Macron challenged global lending institutions to go beyond current relief measures and consider debt cancelation for the most vulnerable countries. Erna Solberg, the Prime Minister of Norway said his country supports the debt moratorium issued by multilateral lenders and assured OACP nations that her country will “remain a close partner throughout the crisis”.

Led by President Cyril Ramaphosa (South Africa) who is also the current Chairperson of the African Union, the OACPS leaders who included Paul Kagame (Rwanda) and Edgar Lungu (Zambia) urged for the lifting of economic sanctions against Sudan and Zimbabwe. They said the international community needs to lift the sanctions so as to enable the two African nations to apply their resources in mitigating their populations from the adverse socioeconomic effects of the current health crisis.

The meeting, also attended by OACPS development partners led by France, Norway and Canada, expressed dissatisfaction at the recent decision by the European Union (EU) to list some of its members as high risk nations for money laundering and terrorism financing. The countries blacklisted by the EU in May this year include The Bahamas, Barbados, Botswana, Cambodia, Ghana, Jamaica, Mauritius, Mongolia, Myanmar, Nicaragua, Panama and Zimbabwe.

Prime Minister Mia Amor Mottley of Barbados, speaking on behalf of the Carribean Community (CARICOM) termed the EU decision as unilateral saying the process leading to the listing was “not transparent”.

President Danny Faure of Seychelles asked the OACP secretariat to push for a moratorium on the publication of the “list of shame” and reiterated the Barbados Prime Minister’s sentiments that the EU’s decision was unilateral. In line with the “Nairobi Nguvu ya Pamoja Declaration” made during the 9th OACPS summit held in Nairobi last year, the leaders resolved to deepen cooperation through South-South, North-South and Triangular Cooperation.

“At the national level, Covid-19 has led to a shrinking of fiscal space while at international level, the pandemic has weakened the pipeline of resources dedicated to development programmes,” President Kenyatta said.

Alongside debt relief and lifting of economic sanctions against Sudan and Zimbabwe, the OACPS leaders called for global solidarity in the fight against Covid-19 and voiced their support for Dr Tedros and the World Health Organization. Further, the leaders agreed to broaden sources of financing Covid-19 response and recovery interventions through public-private partnerships as well as through increased access to concessional financing.

The theme of the inaugural Extra-Ordinary Inter-Sessional Summit of the Heads of State and Government of OACPS was, “Transcending the Covid-19 Pandemic: Building Resilience through Global Solidarity”.