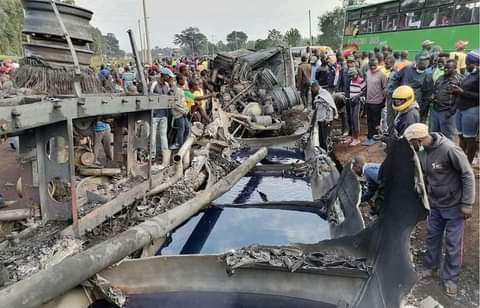 The death toll from the Malanga tanker tragedy has risen to 15 after two more victims have lost their lives while receiving treatment at the Siaya County Referral Hospital.

According to the hospital’s medical superintendent Dr. Liech Odoyo all missing victims have now been accounted for. Dr. Odoyo however said DNA examinations will be done tomorrow to ascertain the identity of the victims.

The 13 initial victims died on Saturday while siphoning fuel after a petrol tanker overturned and exploded in Malanga area on the Kisumu-Busia highway .

Siaya County Commissioner Mohammed Barre confirmed the incident adding  that 28 people sustained burns and were rushed to different hospitals in the county.

The accident occurred  near Argwings Kodhek secondary school in Malanga area within Gem Yala Sub County, a few kilometres from Sidindi trading centre where scores of people died in a similar accident two decades ago.

According to eye witnesses, the tanker which was transporting petrol from Kisumu to Uganda hit a milk transporting lorry that was heading in the opposite direction before veering off the road and rolling landing near the school fence.

Villagers who rushed to the scene started siphoning fuel that was flowing from the tanker and as the scramble ensued, the tanker exploded.

“We should never try to siphon fuel from any vehicle. This is automatic death warrant,” said the County Commissioner.

The Siaya county government , in a statement said it has mooted plans for multi agency continuous civic education about the dangers of siphoning fuel along the Kisumu-Busia highway. The county also said a mausoleum will be established around the Sidindi area with the names of those who perished from the incident along the highway to date, in memory of the departed.

The Siaya County government has also announced that it will waiver the hospital bills of those who sustained injuries are have been hospitalized, and support those who lost their loved ones.

The incident that bought memories of the Sidindi tanker explosion in 2016, when 40 people were killed and more than 30 others injured in Kenya when a tanker carrying flammable substances exploded on the highway after it collided with another vehicle.