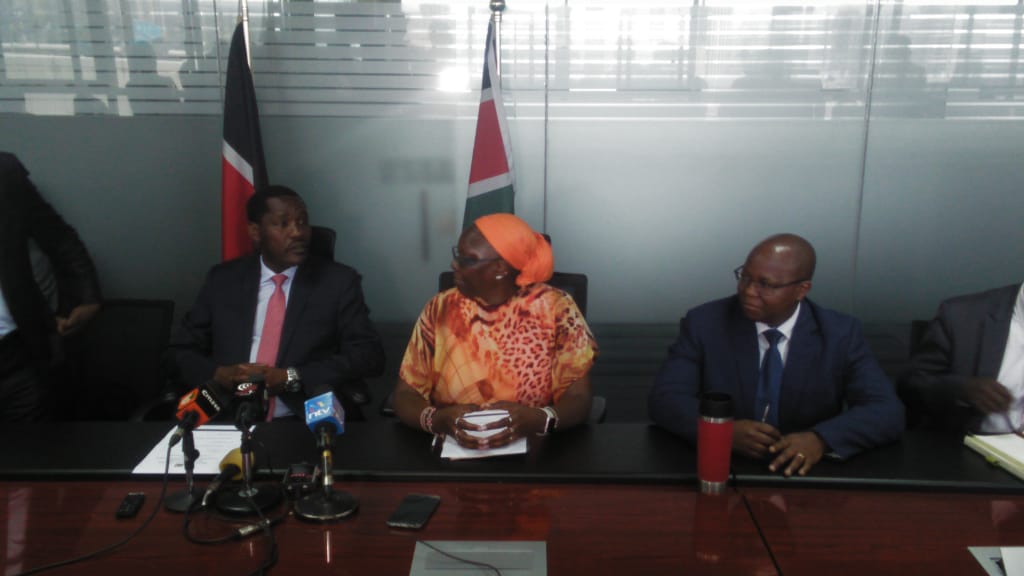 In a ceremony held in Nairobi, Munya said the Trade Ministry has successfuly been negotiating market access for traders, including getting markets in China and negotiating market taarifs to boost exports.
Currently, he said, the US now comes second market for Kenya’s exports after the neighbouring Uganda.

This follows concerns that Kenya would be defying an EAC agreement if she signs the proposed FTA agreement with the United States.
On her part, Betty Maina who has been a Principal Secretary in the same Ministry, said the Trade Ministry will continue working with other relevant Ministries and County Governments to ensure there’s sufficient facilitation of services including enhancing SMEs which contribute about 90{d59e984f9fbc5c09e4ab0305e27bfa5819922b7230cd324f89a660f78358ca33} of the world economy.

She challenged manufacturers to embrace manufacturing some of the small products and goods that are being imported from countries such as China to boost local manufacturing.
Citing the coronavirus epidemic that has hit China, the new Industrialization, Trade and Enterprise Development Cabinet Secretary said the virus has not affected importation of goods and products from the Asian country as long as they comply with the required importation standards.

On the locusts invasion, Agriculture Cabinet Secretary Peter Munya said the government has been able to contain the invasion but the process has been challenging due to the large swarms of the insects and possibly the source.
Munya says spraying teams have been able to safeguard food basket counties that have been affected by the devastating insects, with two spraying helicopters expected from South Africa.

The government says the time frame given to eliminate the locusts is up to June 2020, considering their gestation period since they invaded the country.

With help of the National Youth Service, the Kenya Defence Forces, the Kenya Wildlife Service and the county governments, spraying continues in major affected counties such as Marsabit, Mandera, Isiolo, Garissa, Wajir and Tana River.