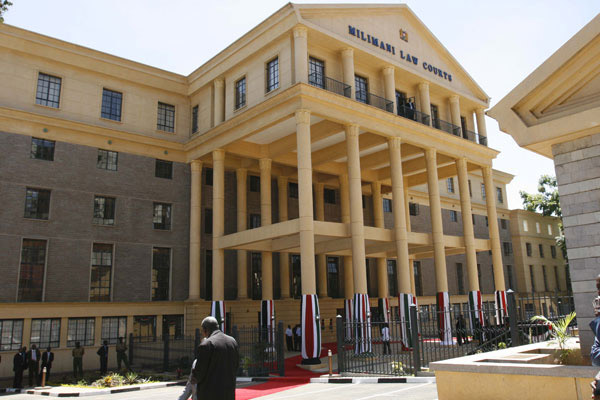 Milimani Law Courts has remained closed as the Chief Justice’s directive to suspend all judicial operations over coronavirus, begun to take effect. Judiciary announced Sunday the suspension of key operations, as part of measures to mitigate the spread of coronavirus which was first confirmed in the country on Friday, and two more cases confirmed Sunday.

Chief Justice David Maraga had announced the suspension of civil and criminal cases, two days after the government banned public gatherings and meetings.

Following the directive, the Entrance of the Milimani Law courts was today  closed with members of the Public not being allowed to access the Courts. The Security personnel could be seen donning face masks and surgical gloves. The Judiciary has also availed hand sanitizer and washing points at main points.

Chief Magistrate Francis Andayi also announced that all criminal matters have been suspended until April 15th this year.
Andayi told members of the Public that only persons processing   fines and Cashbails will be allowed in.

“All criminal matters have been suspended until April 15th”, according to Milimani Chief Magistrate Francis Andayi. “It is only  those who are paying  for fines and Cashbails will be allowed in to process payment,”he said

For High Court matters the Deputy Registrar will give directions on how the matters will proceed”,he added.

“For Plea we are waiting for the  Dpp to address is on whether they are registering any cases,”the Chief Magistrate said.

The Chief Justice had in the directive said “We shall forthwith scale down court activities throughout the country for a period of two weeks in order to allow further consultations and design appropriate measures to prevent the spread of the virus”.

“Hearings and mentions of all civil cases in all courts are hereby suspended with immediate effect,” Maraga said.

Foreign travel by judges and Judiciary staff was also suspended for a month.