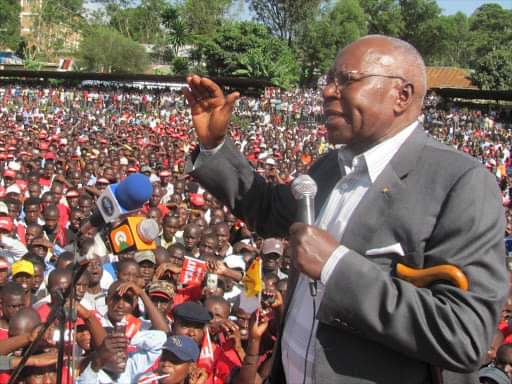 Various leaders have sent their messages of condolences to the family of Simeon Nyachae, following his death early this afternoon. Mzee Nyachae, a Former Cabinet Minister died at the Nairobi Hospital after a long illness.

Confirming the death, his son Charles Nyachae  said Mzee Nyachae passed on after a long illness.He was aged 88 Charles thanked the team of doctors that cared for Mzee Nyachae at the Nairobi Hospital and said the government had sent messages of comfort to the family following the death of their father.

Interior Cabinet Secretary Dr. Fred Matiang’i , Mzee Nyachae’s death is a big blow to the nation ashe was a father figure. He urged Kenyans to support and pray for the family and said details of the burial will be availed later.

“This is a very sad day. Let us remain calm, focus and listen from the family as they plan. Let’s continue to pray for the family,” he said.

President Uhuru Kenyatta  mourned former cabinet minister Simeon Nyachae who passed away today as an icon of Kenya’s progress through the years.

In a message of comfort to the family of the independence era provincial administrator, the President said the late Nyachae’s successful transition from public service to the world of business and politics was a demonstration that focus and hard work pays.

The Head of State regretted the passing away of  Simeon Nyachae saying death had robbed Kenya of a wise statesman whose long service to the nation helped shape the country’s standing as one of Africa’s most progressive economies.

“I am deeply saddened by the passing away of Mzee Simeon Nyachae, a distinguished son of Kenya, a friend and a man whose contribution to the making of the Kenyan nation will remain with us for eternity.

“Throughout his many years of service to the nation, right from his time in the provincial administration through to his transition into business and politics, Mzee Nyachae exhibited exemplary zeal to succeed and as he exits from this world, he leaves behind a rich legacy of success,” President Kenyatta eulogized.

The Head of State recalled his interactions with Hon Simeon Nyachae over the years saying the former Nyaribari Chache MP was a jolly, accessible and dependable elder whose wise counsel and friendship he will miss.

“I recall with nostalgia my many interactions with Mzee Nyachae over the years. As an elder and friend, Mzee Nyachae always had a word of wisdom and encouragement for me. Many will remember and miss Mzee Nyachae’s warm personality and especially his hearty and infectious laughter,” President Kenyatta recalled.

Taking to their social media pages, leaders penned their condolences to the long serving civil servant.

“My heartfelt and sincere condolences go out to the family of former Cabinet Minister, MP, and long-serving career civil servant Simeon Nyachae. The Abagusii community has lost one of its most illustrious sons. May He Rest In Eternal Peace.”

Deputy President William Ruto, on his part, hailed Mzee Nyachae as a progressive, selfless and steadfast leader who was genuinely passionate about public service, politics and uniting people in a common cause.

Kitui Governor Charity Ngilu said she remembers Nyachae as as astute leader who served with dedication. Ngilu said she is saddened by the news of the passing on of former Cabinet Minister whom she served with in the the same Cabinet between 2005 and 2007.

Nyachae served under both regimes of the late President Daniel Moi and retired President Mwai Kibaki. He had also served as a provincial administrator in various parts of the country. Nyachae served as the Chief Secretary, Head of Civil Service and Secretary to the Cabinet between 1984 and 1987 when he retired from the civil service.

Nairobi Women Representative Esther Passaris also penned her message of condolences to the entire Gusii Nation following the passing on, of Mzee Nyachae.

Kenya Film Commission Board boss Ezekiel Mutua on his Twitter page also described the late Nyachae as an enigma, an outstanding long serving top civil servant, an astute leader and businessman who spoke his mind. He added that Nyachae leaves a rich legacy of an impeccable service to the nation.

Nyachae in 2002 ran for the presidency on a Ford-People ticket, emerging third after Narc’s Mwai Kibaki and Kanu’s Uhuru Kenyatta.

The former Ford People leader represented Nyaribari Chache for about 15 years before he lost to Dr Robert Monda in the 2007 General Election.

Mzee Nyachae is survived by five wives and 20 children. His first wife passed on in 2016.