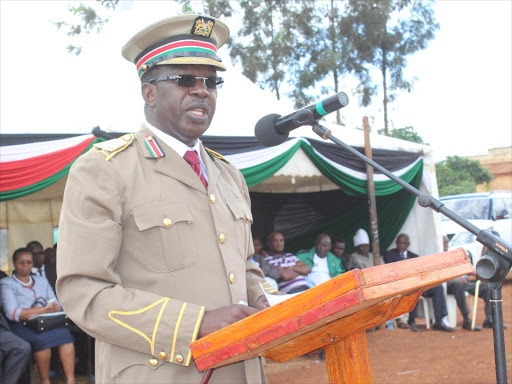 The crackdown on illicit brew, drug abuse and other criminal activities in the coastal city, that was launched on Monday is so far bearing significant gains.
The operation to be sustained for the next 30-days targets outlets selling illicit and substandard alcoholic drinks, unlicensed liquor stores and drug and substance abuse as part of the countrywide campaign to eradicate the vice.

Coast Regional Commissioner (RC) John Elungata has warned that for the next thirty days security agencies will intensify operations against usage and trading of illicit brew and drugs in the area. Elungata said the crackdown on counterfeit products will be extended to the port of Mombasa where substandard and counterfeit products find their way into the local markets.

Speaking during the launching of a one month Rapid Results Initiative (RRI) to eradicate illicit brew and drug abuse at Naivas in Nyali constituency, the Regional Commissioner urged area residents to volunteer information and report any outlet that conducts illegal business and operates outside curfew hours.

“It is important for the local leaders and residents in the region to join hands with security agencies to eradicate the illicit brew and drug menace,” said Elungata who was accompanied by the Mombasa County Commissioner Gilbert Kitiyo and officials from the Multi Agency team.

He said the operation will take place in the counties of Mombasa, Kwale, Kilifi, Lamu, Tana River and Taita Taveta in order to stamp out the vice. The crackdown is part of the nationwide campaign against counterfeit alcoholic drinks and illicit drugs that was launched last week by the Interior Cabinet Secretary Dr Fred Matiang’i.

“In order to protect our young people from this social evil, there is need for closer collaboration between police, local leaders and residents to combat the festering illicit brew and drug problem in the area “said the Regional Commissioner.

NACADA Regional Coordinator George Karisa said Mombasa is among other counties in the coastal region that have been affected by the high prevalence of illicit brew and drug abuse in the country.

According to Karisa, the problem of drug abuse in the region is growing at an alarming rate especially among the youth.

“The drug problem does not only relate to criminal activities but also contributes to ill-health, disability, low productivity and even death,” said the NACADA official.

Karisa said NACADA will work closely with other government agencies to rid the region of counterfeit alcoholic drinks and drug abuse.

Mombasa County Commissioner Gilbert Kitiyo who is leading the crackdown in the county said the multi-agency team will scale up the war against perpetrators of this illegal business which he said has contributed to the rise of criminal activities.

“We will not allow a few greedy individuals to continue enriching themselves through illicit business at the expense of the lives of our people,” added Kitiyo.

Immediately after the launching, the team raided several outlets where they arrested bar owners operating without valid licenses and selling counterfeit or expired alcoholic drinks.