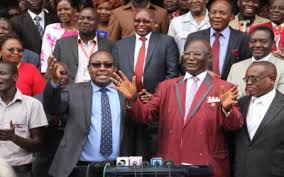 The church in Kenya has joined the list of the various sectors who have been voicing their stand on the recent launched BBI report.

Church leaders under, the Kenya Council of Church Alliances and Ministries (KCCAM) have expressed their disappointment saying the BBI steering Committee failed to take into consideration their proposals.

Bishop Omae has however welcomed the optimism from the former prime Minister Raila Odinga in the meeting with the pastrolists community that the report will be open for dialogue before it is subjected to the people.

KCCAM has at the same time opposed the proposal on the Electoral management body saying it us not a guarantee to a free and fair elections.

On his part, deliverance church bishop, Dr. Mark Kariuki has called for a smooth dialogue that is inclusive in the building of the BBI report consensus.

The leaders have also observed that the recommendations to scrap the woman rep seats is retrogressive.

They have however welcomed the proposal to increase the revenue allocation to counties, the proposal for a 7-year tax amnesty in youth’s Enterprises and the introduction ot the leaders of opposition saying it’s a step to the right direction.