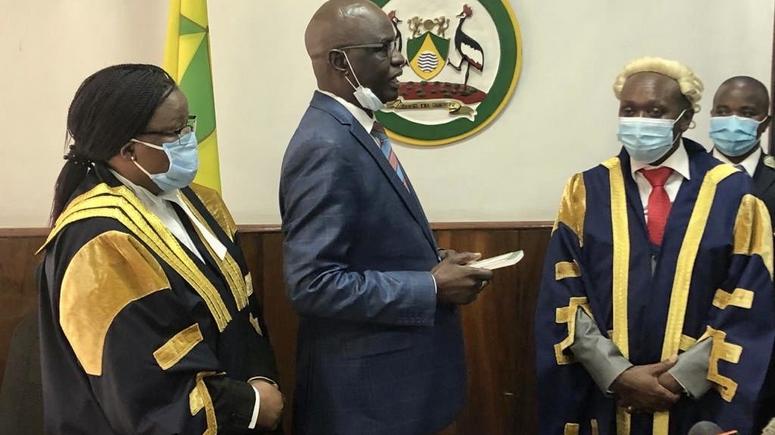 Nairobi County Assembly Speaker Benson Mutura has been sworn in, in a ceremony at City Hall to act as Nairobi Governor for 60 days following the impeachment of Governor Mike Sonko.

The ceremony was attended by Nairobi Metropolitan Services Director General Mohammed Badi, among others.

This effectively sets the stage for the electoral commission IEBC to schedule a by-election for a substantive governor. The gubernatorial by-elections to replace Sonko are now set for February 15, 2021.

Last week, Mutura’s swearing in failed to take place after the judge assigned to preside over the taking of oath of office arrived late for the ceremony. According to the law, such an event should be performed between 10am and 2pm. However, the judge arrived a minute past 2pm resulting in the cancellation of the event.

Last Thursday, Senators voted to have Sonko removed from office upholding the resolution by Nairobi MCAs to impeach him.

Upon taking office as Governor,Mutura’s in tray includes the signing and approval next week, of the Nairobi Metropolitan Service Budget that Sonko had refused to sign.

In his speech, Mutura has promised to work closely with NMS for the betterment of Nairobi County.

Critics of Mutura’s take over however have pointed out that he does not have a degree as required by the constitution for a governor.

Renowned lawyer Donald Kipkorir on his social media page, opined that if Nairobi County Assembly Speaker is not a graduate and therefore unable to be Acting Governor, the Members of the County Assembly have a duty and right to remove him.

“The County Government Act does not give a period for Notice of Removal .. The MCAs can therefore give notice today to remove him on today, Monday”, Kipkorir pointed out.

He further states that Mutura can also opt to strategically “temporarily step aside” as Speaker and allow a graduate MCA (to)be elected Speaker on Monday.

“And immediately the new Speaker is sworn in as Acting Governor, the MCAs can reinstate Mutura as Speaker. All these can be done on Monday”, he Tweeted.