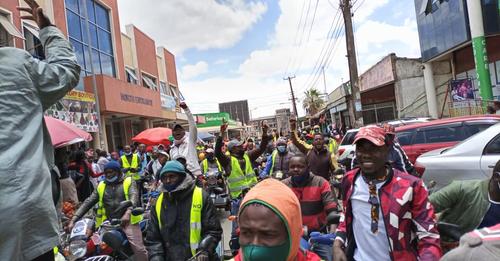 County Governors are now suggesting that leaders in the boda boda sector across the country be taken to Rwanda on a benchmarking trip.

According to Council of Governors chairman Martin Wambora, this is necessary for the bodaboda leaders to learn order in Kigali, so as to operate in a disciplined and organized manner. Wambora urged law enforcement agencies to ensure that those who assaulted the woman in the viral video are punished.

“On a sour note, our attention has been drawn to the viral video shared earlier this week of a woman being physically and sexually assaulted by Boda boda riders. The council strongly condemns this heinous act and urge all law enforcement institutions to ensure all the perpetrators are brought to book and severe action taken against them”, the statement reads.

This comes a day after the President ordered a crackdown on all boda boda operators in Nairobi and across the country and directed the re-registration of all motorcycles.

The riders today staged demonstrations protesting against police crackdown targeting them. They blocked a section of the Thika Superhighway at Githurai where they engaged police in running battles. Similar protests were reported in Kiambu and Kerugoya .

However, Azimio la Umoja presidential candidate Raila Odinga has called on police to stop harassing bodaboda riders. While terming the sexual assault of the female motorist in Nairobi as regrettable,

The ODM leader noted that not all bodaboda riders are rogue as most of them work to put food on their table without ill motives. He called on the police to reconsider harassing the bodaboda riders and instead guide them to do the right thing.

This comes as , a Magistrate’s Court has allowed the Directorate of Criminal Investigations DCI to continue detaining sixteen suspects accused of robbery with violence and sexually molesting a female diplomat for 15 days to complete the probe into the matter.

Milimani Principal Magistrate Gilbert Shikwe said that the application by the police was merited and ordered the suspects to be held at Gigiri police station pending investigations.