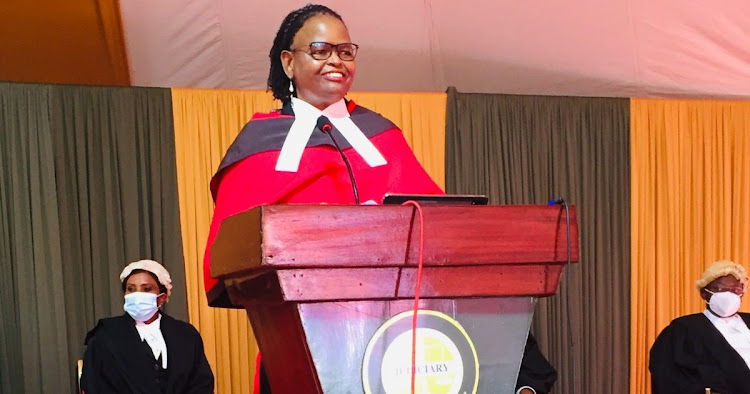 The Supreme Court has rendered a null and void verdict to the 7 main issues that had brought the Building Bridges Initiative BBI Constitution Amendment bill to the apex court.

The 7 Supreme court judges led by their president, Chief Justice Martha Koome, allowed 5 of the appeals raised by the Court of Appeal and the High court, and disallowed two.

The judges were unanimous that the he Basic Structure doctrine was not applicable in Kenya. They also disagreed  with the Court of Appeal’s verdict that the president  does not enjoy immunity, stating that a sitting president cannot be subjected to the rigors of civil court proceedings.

They however disagreed with the  question on the referendum questions to be submitted as separate questions, stating that it was  not considered ripe for determination.

In her orders ahead of the final judgement to be issued on Tuesday next week , Chief Justice Martha Koome, said  the 4 sequential steps given by the high court and the court of appeal are not necessary.

The apex Court also concluded that the President cannot initiate changes to the constitution.

Meanwhile, the ruling absolved the Independent  Electoral  and Boundaries Commission – IEBC  from obligation to ensure that the promoters of the BBI complied with requirements on public participation.

In a statement following the Supreme Court ruling, ODM leader Raila Odinga who was the key initiator of the Building Bridges Initiative , said he had noted that the BBI process has been upheld together with the content of the bill itself, save for the provisions of the second schedule.

“What the judges faulted was the role that the state is said to have played at the commencement of the popular initiative. We shall deliberate on the way forward and decide on a future course of action that protects the interests of all those who voted to see the amendments come to light”, he stated.

Deputy President William Ruto, on his part,  said the collapse of the Building Bridges Initiative (BBI) has marked the end to political conmanship in Kenya.

Speaking today in Wajir and Lamu Counties where he held a series of public rallies to campaign for Kenya Kwanza, Dr. Ruto said the Supreme Court ruling was a win to millions of Kenyans struggling to make ends meet

“The end of reggae is the end of political conmanship in Kenya,” said Dr Ruto.

He termed the Initiative as a fraud that aimed at meeting the selfish interests of few individuals. The DP noted that the ruling by the Supreme Court was a validation that BBI was an illegal and an unconstitutional exercise.

He explained further that the country had lost four precious years in a useless exercise that dragged the realization of the Big Four Agenda.
“The Handshake brothers and the promoters of the BBI must now apologize to Kenyans.”

ANC Party Leader Musalia Mudavadi on his part, observed that Kenya cannot have a government that is always experimenting on the people . He noted that BBI ruling is a lesson to criminal and unlawful trends witnessed in Kenya today.

Mudavadi noted that Kenyans cannot continue to suffer because of some selfish and greedy individuals.

“Now that BBI is null and void, those responsible for it must be held to account for the resources that were put in that criminal exercise,” he said.

On his part, Moses Wetangula of FORD Kenya said independent institutions must be respected and refuse to be intimidated by Government mandarins.

”The President must appreciate that every misadventure has consequences. You (Uhuru) were misadvised, now you carry the shame,” he noted.