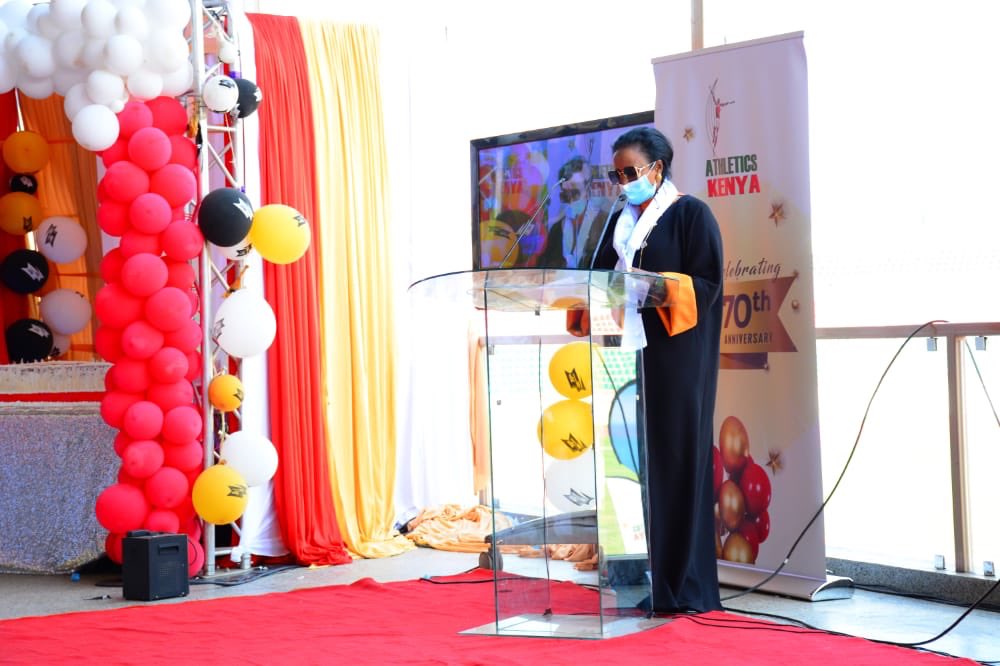 Pomp and colour has been the dominant theme as Athletics Kenya (AK) celebrates its 70th anniversary, currently ongoing at the Nyayo National Stadium with more than 60 veteran athletes congregating at the venue to mark the feat.

In her remarks, CS Amina said,

“As you celebrate these 70 brilliant years at Athletics Kenya, I would like to offer my, and the government’s sincere appreciation and congratulations to you for a job well done. May you leave a strong legacy to last another 70 years and more!”

The event will later culminate in the awarding of Kenya’s founding athletes led by Wilson Kiprugut Chumo, Kipchoge Keino and Amos Biwott. Deceased athletes including Nyantika Maiyoro and Ben Jipcho are also set to be feted.

World champions Timothy Cheruiyot, Ruth Chepngetich and Hellen Obiri are among active athletes at the celebrations.

AK has made major milestones since it was formed in 1950 and is using the occasion to display its rich history as well as outline its roadmap for the coming years.CAS, Ministry of Sports Hassan Noor Hassan and AK President . Jackson Tuwei toured the exhibition Centre at the AK at 70 celebrations.

CS Amina said in 2021 the Sports ministry will start the process of documenting triumphs and achievements in virtual archives in sport through a partnership google.

However, even as the athletics body celebrated the milestone, several setbacks were also recognized, the biggest being the doping scandals that have seen several athletes banned from participating in international events.

“The government shall not tolerate drug cheats in sport and we are working closely with our agency, the Anti- doping Agency of Kenya, to ensure all who use, or abet the use of banned performance-enhancing substances meet with the full force of the law,” CS Amina cautioned.