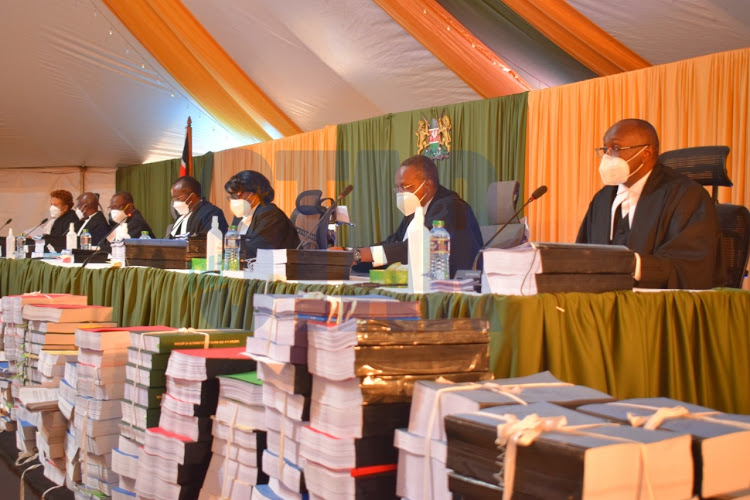 The 7- judge bench of the Court of Appeal led by its President Daniel Masinga, have now set 20th of August as the date of the ruling in the appeal against the ruling that declared the Building Bridges Initiative Constitutional amendment unconstitutional.

President Uhuru Kenyatta, ODM leader Raila Odinga, the BBI National Secretariat and the Independent Electoral and Boundaries Commission (IEBC) filed separate petitions challenging the High Court ruling that declared the bid to amend the constitution through the BBI as unconstitutional.

The petitions were however after consultation consolidated into one case.

Top constitutional lawyers in the country formed part of the legal teams that  battled out in court to salvage the initiative spearheaded by the President and his handshake partner ODM leader Raila Odinga.

The court further ruled that President Kenyatta had violated provisions of Chapter 6 of the Constitution on leadership and integrity, and that he can be sued in his personal capacity and not as the head of state.

On Monday, the government secured its first win after the judges struck out part of an appeal filed by Nairobi lawyer Charles Kanjama.

Waweru adduced the joint report of the National Assembly departmental committee on Justice and Legal Affairs (JLAC) and the Hansard of the Senate on the debate and approval of the Constitution of Kenya (Amendment) Bill, 2020.

The two documents contain a detailed analysis by Parliament on the BBI bill with some sections indicating that various proposals in the BBI, such as delimitation and allocation of  70 constituencies, was legally flawed.

In their conclusion Friday evening, after  four days of hearing various submissions, the judges said they will need time to sift through the volumes of documents submitted by the battery of lawyers who represented the over 60 respondents in the case seeking to overrule the High court decision.

Prof. Githu Muigai, in attempting to plead with the court to give an early date, said  the electoral commission  IEBC timelines are stringent as the country moves towards the General Elections in 2022.

Kenya is expected to hold the General Elections on the 9th of August, 2022.

However, Justice Musinga said they will not change the date.

Earlier on, Senior Council Martha Karua, who is part of the team representing the respondents in the case, asked the court to adjust its time in order to allow them to finalise their submissions. Karua said the court could sit past the official time if need be.

“We were pleading that you consider giving us a little more time than an hour. Those of us who will finish before, we will not take the court’s time. We appreciate the court wishes to finish this case today, and still, it can be finished. We are just appealing that the court be flexible even if it means sitting into the evening to finish the matter,” Karua said.

Dismissing the appeal, Justice Musinga said that the court cannot have night sittings, saying sitting past the court’s official time has become an issue previously.

“The so-called night sittings have become an issue in our jurisprudence and we may not be able to go beyond six,” Musinga said.

Patrick Kiage, who is one of the seven-judge bench members said that one of them is a Seventh-Day Adventist member, as well as some of the advocates in the case, hence rendering sitting past 6pm impossible.

Justice Musinga will retreat with his colleagues Justices Hannah Okwengu, Patrick Kiage, Fatuma Sichale, Gatembu Kairu, Roselyne Nambuye and Francis Tuyyoit for the next 50 days to determine the matter that attempted to set the country in a referendum course, ahead of the 2022 General Elections.