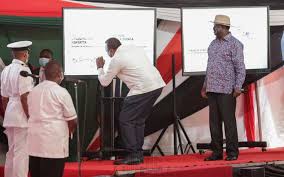 ODM leader Raila Odinga has termed the BBI signature collection as a success after 5.2 million Kenyans appended their signatures endorsing the proposed amendments to the constitution, through the BBI process, by Friday morning.

The BBI secretariat team said the number of signatures could go as high as six million by end of day today , as tallying is still going on.

The signatures will, in the next one week, be submitted to the Independent Electoral and Boundaries Commission (IEBC) for verification before the Constitution of Kenya Amendment Bill 2020 is submitted to assemblies for action.

Raila said the process is people driven as he challenged opponents of the initiative who questioned the reasoning behind the process.

Speaking during the event Siaya Senator James Orengo said that with the signatures collected the stage is now ready to present the signatures to the Independent Electoral and Boundaries Commission.

He said for those opposed to the process that seeks to amend the constitution in the BBI process are entitled to their opinions although not offering any new perspectives.

Thirdway Alliance party has moved to court to seek an interpretation of the referendum process of the BBI document.

The party, through Mutuma Gichuru and Associates Advocates, has filed a case at the High Court seeking interpretation on whether the BBI amendment Bill being sponsored by the state qualifies to be a Popular Initiative as envisaged under Article 257 of the Constitution of Kenya.

The party wants the court to rule that the entire BBI process culminating in the launch of the bill was done unconstitutionally in the usurpation of people’s exercise of sovereign power.

It also says that IEBC, which is among the respondents in the case, cannot exercise its powers under Article 257, which is to receive, verify, and approve the bill under the current circumstances.