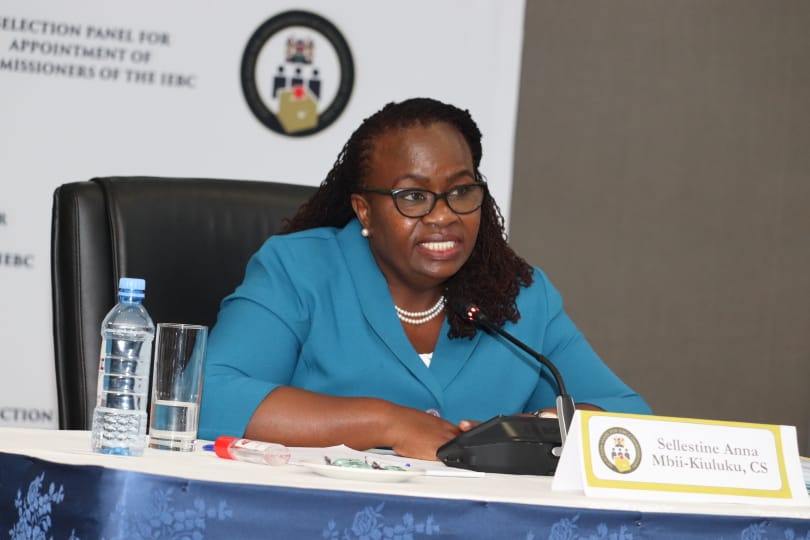 Sellestine Anna Mbii-Kiuluku from Makueni County, has closed the day during interviews for the position of Member of IEBC by the Selection Panel, seeking to replace four commissioners who resigned after the 2017 General Elections.

30 out of 36 candidates have now been interviewed in the exercise that kicked off on the 8th of July 2021.

Earlier today, Dr.Salim Ndemo, took his seat before the Selection Panel. Dr. Ndemo, a former Public Service Commissioner, hails from Kisii County and has served in the public service in various capacities.

The panel led by Chairperson Dr Elizabeth Muli wanted to know how Salim Ndemo managed to get a Master’s and a PhD degree within six months. According to academic papers submitted in his application, he was awarded a Master’s Degree in Busines Administration on August 15, 2008, and subsequently a PhD on January 30, 2009.

“I know the kind of effort and time and sweat that goes into preparing and getting a PhD. I am curious to know how you got yours in 6 months,” Muli remarked

The panel also raised concerns on how he managed to complete his two post-graduate degrees in such a short time despite working full time at the Public Service Commission (PSC) between 2003 and 2009.

In his response, Ndemo stated that he had a very flexible timetable and was able to do them simultaneously, one after the other.

“Just to inform you that when we went online, we found that this university is unaccredited and is registered in the British Virgin Islands, I don’t know if you are aware of that?” the panel chairperson questioned.

Ndemo stated that when he enrolled for the programme, the university was enrolled in Delaware. He explained that the degrees are notarized(validated) which means the government is aware of its activities even if the university did not comment on the contents of that.

Col. Saeed Khamees Saeed was the first candidate  in the 10th day of Oral Interviews . Col. Saeed who previously served as a naval officer in the Kenya Defence Forces, hails from Mombasa County.

Col. Khamees defended his 34 years’ experience in both technical and administrative duties at the Kenya Defence Forces and promised to collaborate with other commissioners to deliver credible results to Kenyans.

Col. Khamees assured the commission that he will also propose effective voter education frameworks to ensure a streamlined voting process to enhance efficiency.

When asked by panelist Joseph Mutie on what he would do if the election results were disputed and considered irregular, he asserted he would take responsibility as a commissioner.

“I will take responsibility if anything goes wrong. I will resign and go home,” Col. Khamees stated.

He added that he would propose an internal investigation to be done and legal action taken against those found culpable.