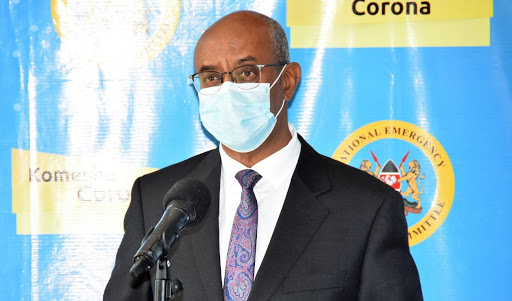 The Country has recorded 25 new Covid-19 Cases in the last 24 hours after 632 samples were tested. This brings the total number to 607.

22 of the patients are Kenyans, while 1 is a Ugandan, 1 Tanzanian and 1 Chinese national. A total of 21 are male and four are female.

Health Chief Administrative Secretary Dr. Rashid Aman on Thursday said   17 cases are from Nairobi, Wajir (2), Kajiado(2) and one each from Migori, Mombasa and Isiolo counties.

Isiolo becomes the latest county to report a positive case of Covid-19. This now brings the number of affected counties to 18

7 Covid-19 patients have been discharged after recovery bringing the total number of recoveries to 197.

Three more deaths have however been recorded bringing the total to 29.

CAS Aman has asked Kenyans to report Eastleigh and Old Town residents who have sneaked out of the areas following the cessation of movement order by the government. He has cautioned people against moving out of highrisk areas to other places, after reports showed massive exodus of people from Eastleigh and Old Town.

“We are aware the measures of cessation set in Mombasa Old Town and Nairobi’s Eastleigh may cause some inconvenience but we appeal for all to understand. The measures put in place are meant to protect you.” Said CAS Dr. Rashid Aman

“Some people have decided to sneak out of Eastleigh and Old Town and relocate to neighbouring estates, this is counterproductive and dangerous.” Aman added

The CAS has reiterated the importance for people to come out for mass testing because it is the only way this disease can be fought.

At the same Aman said d=that the The government has made plans to evacuate Kenyans who had travelled to India for treatment. They are expected to land at JKIA this evening. MoH officials will be there to facilitate their arrival and subsequent self-quarantine at home