152 Pharmacies and Clinics shut down in North Rift 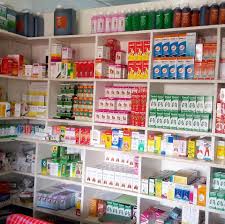 The Pharmacy and Poisons Board has shut down 152 Pharmacists and Clinics that were operating illegally in the North Rift region.
This follows a 5-day operation that was conducted jointly by the board officials and the security team in the North Rift Counties.

According to the Pharmacy and Poisons Board chairperson Jacinta Wasike, a majority of the shut down facilities were unregistered while others were being operated by quacks.

Addressing a media briefing at the Uasin Gishu County Commissioner’s office in Eldoret, Wasike noted that 70 of the closed facilities were from Uasin Gishu, 25 in Nandi county and 20 in Trans Nzoia.
The operation was also conducted in Elgeyo Marakwet, Baringo and West Pokot counties.

The board said the names of the closed down facilities will be handed to regional Commissioner and County Commissioners to ensure no facility reopens without meeting all the requirements.
Uasin Gishu County Commissioner Abdirisak Jaldesa assured their commitment to ensuring no chemist or pharmacy operates illegally